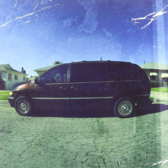 Welcome to Backseat Freestyle. This is my weekly hip-hop newsletter I send out every Friday (I know,